Designing a red, pink and cream tabletop for Nespresso at John Lewis 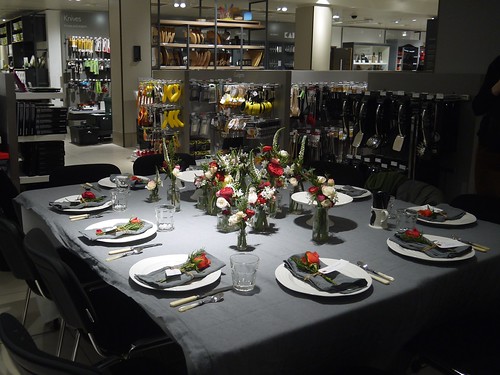 If you’ve read LLG for a while, follow me on Instagram, or have read my cookbook, then you’ll know that I love designing what my American friends call a tabletop.  Making my dining tables look pretty is an integral part of any kind of entertaining that I do, but I believe that it shouldn’t be a huge effort and that if all you have time for is to scatter some tealight holders and cut some flowers down to fit into a jam jar then that is just as good as what I am going to show you here. 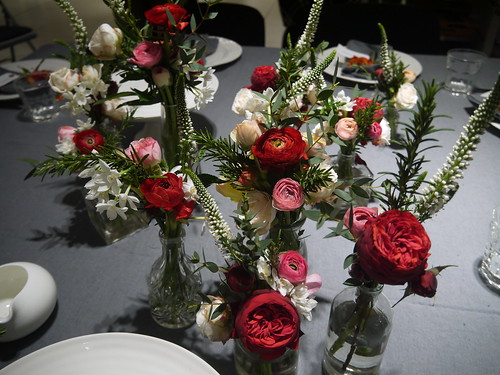 The week before last Michelin-starred chef Phil Howard from The Square, Kitchen W8 and The Ledbury, and myself co-hosted a breakfast and demo for consumer press in John Lewis Oxford Street’s kitchen department to celebrate the launch into store of the new KitchenAid Nespresso machine. 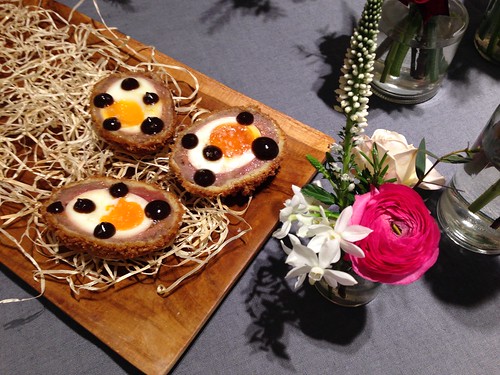 Phil was making delicious breakfast canapes, using coffee flavours and my role was to make the event look beautiful, bearing in mind that we had to bring in everything ourselves, as Phil’s demo and breakfast were taking place in the middle of the department store’s kitchen floor before it opened to the public that morning. There’s also no natural light, as we were in the basement. 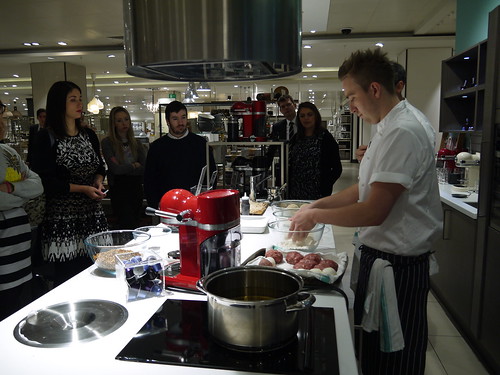 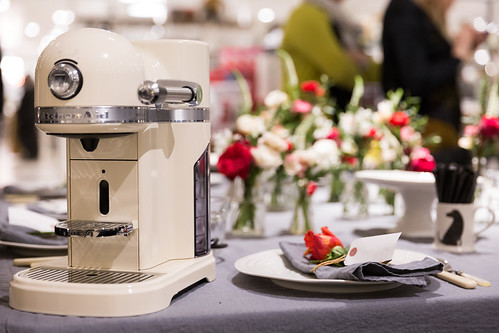 I needed to choose a colour scheme, crockery, glassware and cutlery that was both appropriate for the food, and to complement the new Nespresso KitchenAid machines, which are Onyx Black, Candy Apple, Empire Red, Medallion Silver, Frosted Pearl and Almond Cream. 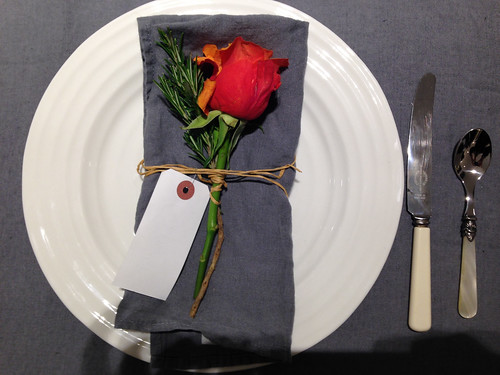 White table linen can be too harsh against primary colours, so I decided to use my own large grey linen tablecloth and napkins as the background colour. On each place setting I placed a single orange-y rose bound with rosemary using clever wired raffia. Cream paper luggage tags that I picked up at Merci in Paris were perfect as place cards, with names hand written by me in ink with a fountain pen. 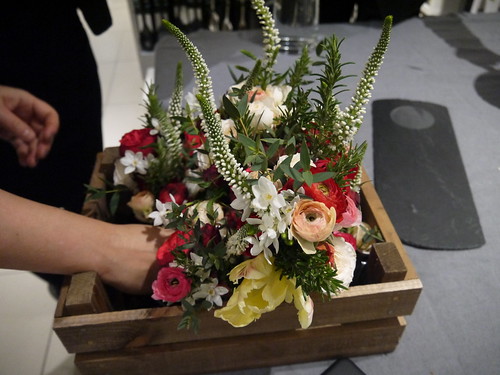 I went to New Covent Garden Market at Vauxhall very early two days beforehand to choose the flowers for my design scheme. I came home with armfuls of red roses, cream spray roses, white veronica (for height), pink, red and blush ranunculi, cream narcissi, branches of rosemary and a huge wrap of eucalyptus. I prepped the flowers when I got home and left them in my conservatory to open up.

My collection of small glass bottles comes into its own for events like this: I salvage old scent bottles, incense stick holders, tiny jam jars and use them as vases. 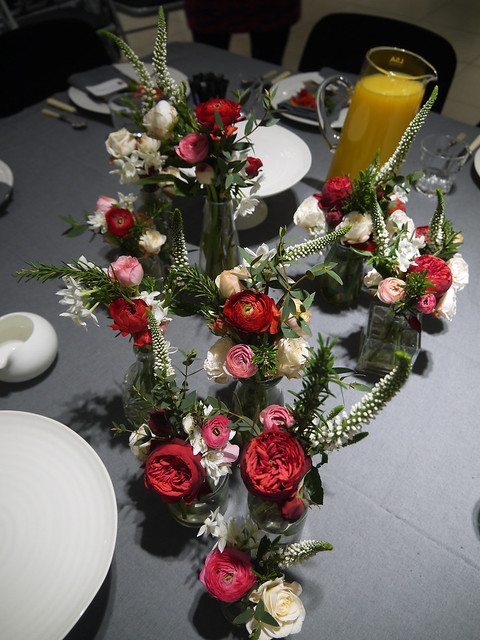 I had all the fun of doing a supermarket sweep around John Lewis’ kitchen, china and glass departments to pick out what we needed. I wanted a mixture of contemporary design, along with a few vintage touches.

I chose Sophie Conran’s beautiful cream collection for Portmeirion as my anchor pieces – the large plates and two beautiful footed cake stands. Cutlery was my own vintage bone handled knives and pretty faux mother of pearl teaspoons from John Lewis’ own range. 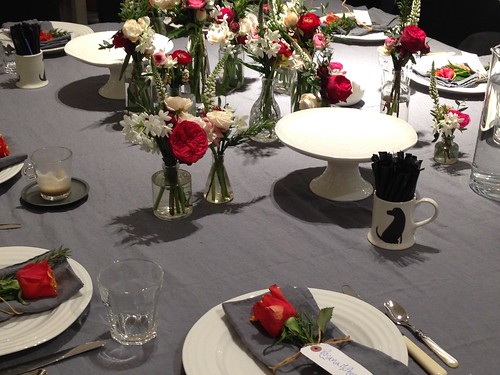 I love Fenella Smith’s ceramics, and so I picked out her black lab mug to hold the sugar sachets. 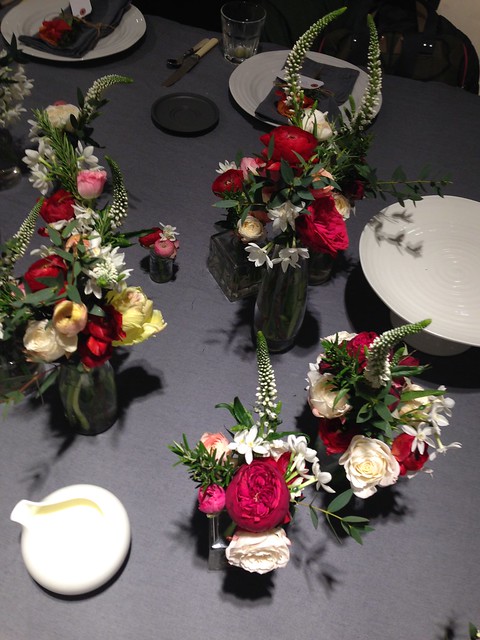 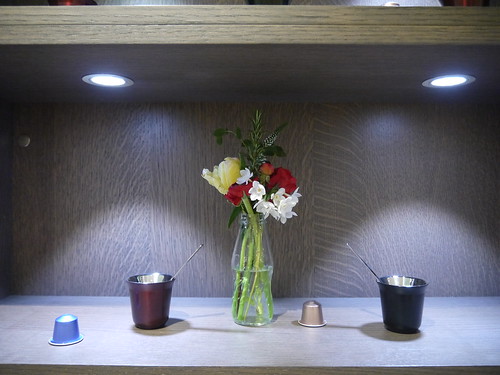 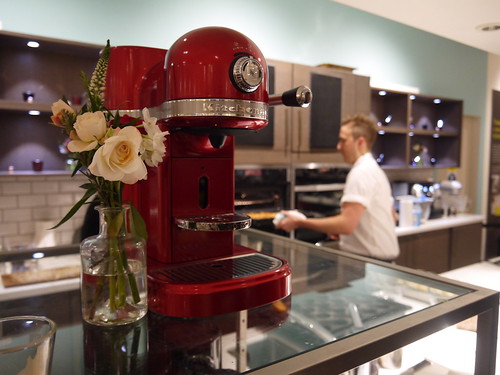 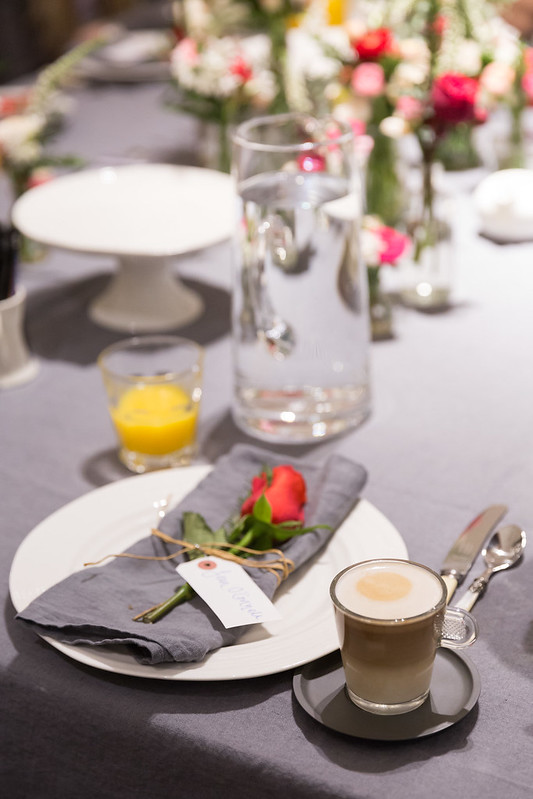 And then it was as if we had never been there… 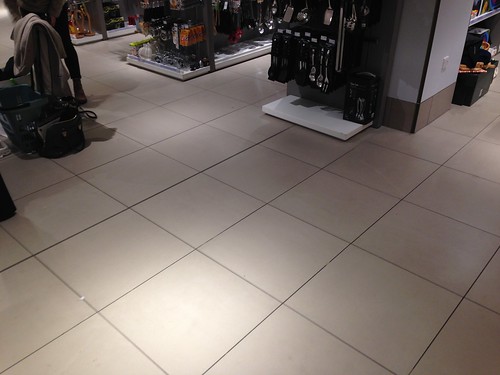 The pieces I chose from John Lewis were:

Manhattan: My life in pictures

lovely styling. Also always struggle with white tablecloths – please share where you got your grey one from?

@Maria Brawn: Hi Maria, I searched for one for ages, and my mother eventually found this grey linen one from a wholesaler with a stand at the Spirit of Christmas Fair in London last December. LLGxx