One of the more unlikely discoveries I’ve made since living in New York is that I love baseball. Really, properly love it. Of course it’s just glorious rounders souped up a bit, so there’s no reason why I wouldn’t. It helps that lovely Jill is to American team sports as I am to fashion designers, so she has explained the game slowly to me in words of one syllable, as we’ve sat in the Yankees stadium in the Bronx. (Although I remain steadfastly unconvinced of the sex appeal of Mr Jeter.)

I’ve been quite spoilt by the games  (one musn’t call them matches) I’ve been taken to by my New York friends. JG took me to the old Shea stadium to see the Mets vs the Dodgers, & bought me a cap to top off my outfit two summers ago: I am, as Derek Blasberg would say, so CLASSY

And, rather thrillingly, one of S’s blue chip hedge fund clients invited us to join him in his debenture seats in the second row, right next to the Yankees dugout. At $450 a pop (old stadium) this was my first, and was probably my last, chance to get close enough to the action to be able to prove my point that Yankees players aren’t that hot. 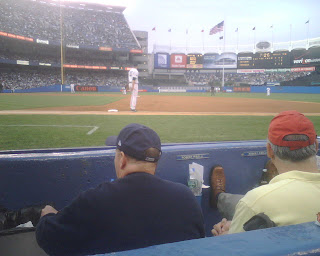 S & I  made a right pair: like a rainbow had thrown up in our row. He was wearing a super bright yellow cashmere sweater with the avowed intention of sticking out like a sore thumb so he cld be spotted on the telly, & I had come straight from work in a multi-coloured frock & four inch wedges. (It was amusing walking down the rows to the very, very front through a sea of grey & navy blue.)

The clients were ace – no needing to be on best behaviour. Knocking fifty, super switched on, hilarious and full of compliments, they told stories of Wall Street in the 80s to make your hair stand on end.

Needless to say, the constant grazing and drinking at baseball games is extremely attactive to me. 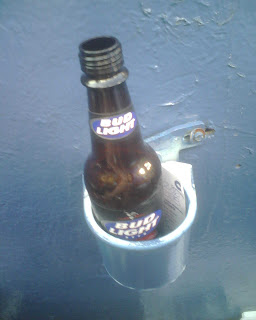 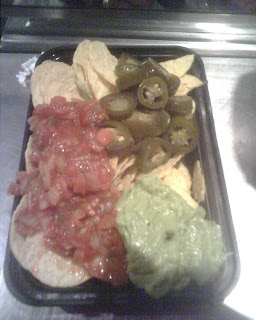 We drank beer and ate nachos, and I got a spare ball thrown to me by a Yankee – and covered myself in shame at work the next day when I failed to identify which one had actually thrown it at me. 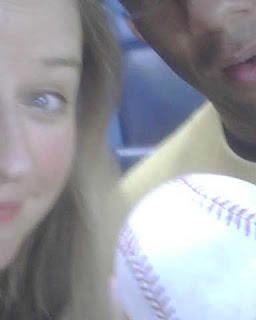 London: Inside Battersea Power Station for the last time…

The day where the apartment building caught fire…

My Life in New York

A common or garden Manhattan Saturday

Oh, that brought back memories, LLG. A couple of years ago my husband and I were invited as guests of Boeing to watch a Mariners game at Safeco Field, Seattle where they played god only knows who. It was hot dogs and coke a go-go and we were surrounded by the sweetest people trying desperately hard to teach us the rules despite us not having the slightest interest in the outcome. The atmosphere was just electric and it remains by far the most surreal thing I have ever had the pleasure of doing in the US.

I LOVE the photo of you in a baseball cap and chandelier earrings. (You really do always wear them! I love them as well.) A fashion editor who doesn’t take herself too seriously – respect.

its weird, i am not a crazy baseball fan like it seems the rest of america is. although i will say that i do appricate the sport, its quite intense. the only two times that i went to a baseball game was in montreal, canada… isn’t that the funniest thing? 🙂

Dear Ms Wilkins: I’ve read between the lines in your baseball post and I do believe I picked up the hint that you might indeed, on some level, prefer the Mets over the Yankees. I’m a lifelong Met fan and firmly believe that New York is a National-League city. Plus, that Met cap suits you very well, if you don’t mind me saying so. Please confirm or deny my impression. Thank you.

In the span of three days, you’ve treated us to the joys (and sorrows) of an Easter lunch, an insider’s review of the Metropolitan, Mr Conran, and now (our) beloved baseball and the Yankees. Where else can I find such a witty, insightful, intelligent – and fun – blog?

Nowhere but LLG. Keep calm and carry on! tIO x

I loved this: and Maxine, snap! I’ve been to maybe a dozen Mariners games (and worked for the Seattle indie publishing press who’ve put out several books about the Ms) and had NO IDEA I was going to love it as much as I did. ‘Take Me Out To The Ball Game’ gets me every time.

Thanks for evoking all those happy memories of life in the land of the free, LLG xx

That’s a lovely photo of you, so glam 🙂

Sorry I have nothing to say on the subject of baseball /:sheepish/

Oooh, the jealousy!!!! I come from a long line of Yankee fans (I was born to love the pinstripes!) and have yet to see them on their home field.

Baseball is not rounders – http://search.barnesandnoble.com/Baseball-before-We-Knew-It/David-Block/e/9780803213395 – any more than lacrosse is hurly.
(Just want to save you the eye rolling or title of “annoying British person” NYkrs will talk smack about you over this.)

I am so glad you got to see a game in the real Yankee Stadium, everyone should get do that at least once. I grew up seeing games there and still cannot believe that they tore it down. Just reeks of the end of Planet of the Apes…the idiots tore it down..insanity.