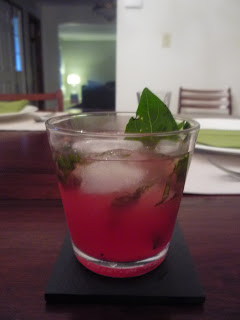 I called this a martini as it is nothing more than vodka with a splash of flavouring, but of course it would have a classically trained bartender raising an eyebrow at its presumption.

It’s so simple, so fruity, so…thoroughly restorative that it seems perfect as a cooks pickmeup/reward for slaving over the barbecue(grill) on a sunshine-y day.

There are plenty of recipes kicking around for watermelon cocktails that require simple syrups (gomme) and various other ingredients, but this is so simple a child could make it. Not that I recommend that infants play with vodka but you get my point.

For two short glasses hack off a piece of watermelon about six inches long, chop it up, pick out the seeds, and squish it through a sieve, a juicer or any kind of press. (I found some random press in the kitchen whose usage remains obscure.)

Finely chop a handful of basil leaves, reserving a couple for decoration (maybe not the ones that look snail nibbled as in my glass above), and divide the leaves between the two glasses. Add three or four ice cubes & pour over a lovely big shot of frozen vodka (I used Grey Goose) and top with watermelon juice.

It’s hardly a recipe but damn it tastes deeeeeelicious.

(If you wanted to get all fancy pants, you could macerate the basil leaves in the vodka overnight to really infuse the basil flavour, but I am waaaay too lazy.)

LLG Shops in the US: Williams Sonoma cookshops

I realy could do with one of those! …or two.

even though it's still in the a.m. hours where i am as i read this, the sun has set over the yard arm somewhere. bottoms up!!!