Lollapalooza was a great experience: to be at a festival in the heart of a city rather than the rolling English countryside felt other-wordly. Nice too to be in a bed each night than my battered old festival tent.

Alhough reporting on a festival isn’t the most arduous assignment, I even managed to do some unexpected ‘work’* at the rather fabulous Lollapalooza artists & performers CKIN2U relaxation & gifting suites at The Hard Rock Hotel. We left laden down with Skullcandy headphones, the delicious-smelling entire CK fragrance range, Calvin knickers & sunglasses, and even new super comfy plimsolls from PF-Flyers, and certainly refreshed by the vodka bar. We spent Saturday night at the private CKIN2U Blender Sessions back there, where I asked the on-site tattoist to touch up my tattoo. He declined – I think I may have been a bit tipsy by then. 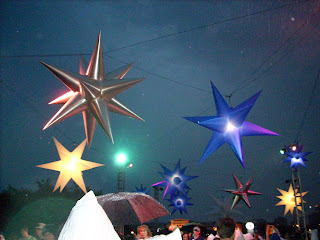 As far as the Festival itself was concerned, rather than the being given free stuff bit, dancing like a fool at Daft Punk as the light came down, and the skyscrapers lit up was one of those transcendental experiences. Watching the Daft Punk pair, dressed in their traditional black leather jumpsuits (designed by Hedi Slimane no less) & robotic, LED enhanced helmets, perched on top of a pyramid on the main stage, and illuminated by a staggering light show, I did wonder about the urban myth – started on Popbitch –that Homem-Christo & Bangalter pre-programme everything, hire two guys to wear their robot outfits on stage, and bugger off elsewhere). Still, hearing brilliant mixes of Around The World & One More Time and giggling as they incorporated Stardust’s ‘Music Sounds Better With You’ into their closing mix, whilst we jumped around like Mexican beans in that setting in a huge crowd, it didn’t matter who might have been under those helmets.

We loved & danced to like fools: The Rapture (to get a crowd to dance in the 95F midday sun to your rocking tunes is an amazing feat); The Fratellis, Daft Punk, Electric Six,

We loved and listened to from a prone position (too too hot, too hungover) Kings of Leon, Amy Winehouse, The Cribs (“ We’re from Wakefield everybody”), Satellite Party, Rodrigo y Gabriela, LCD Soundsystem, M.I.A

*Meeting the US PRs for the brands I often write about – not often one gets to mix work & play in such pleasant surroundings.

Manhattan: living in a sauna

My Life in New York

Istanbul: a city for the 21st century?